Before & After : Studio Table

Besides purging out the basement for my studio for the last few weeks... I have been working on refinishing an old table that I almost threw out a few years ago. I apologize for my before pic because I didn't really think about taking a before pic of just the table and I had already a full coat of primer on it once I did think about it. My before pic is a little blurry and out of focus because it's actually a cropped photo of one of my before pics for my studio so that table wasn't my focus. Okay, anyway moving on....
BEFORE 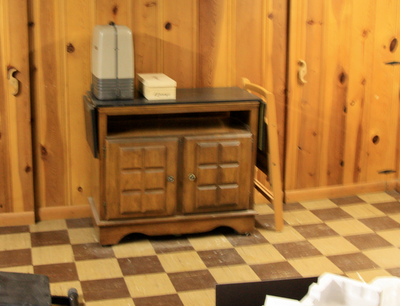 Previously the table had a black top with sides that could fold up or down. The whole thing was in desperate need of something otherwise it would have found itself out on the curb.
AFTER 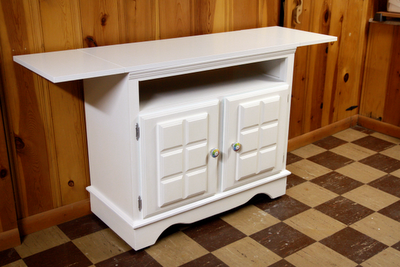 For the overall color of the piece, I used paint that I already had on hand which happened to be Behr Ultra White in a semi-gloss. The wall behind this piece is going to be red and the majority of the other furniture will also be white. This is also the same white paint that will be used for all of the trim for the studio when we get to that stage and is also the same white paint used for all of the trim work in our home. 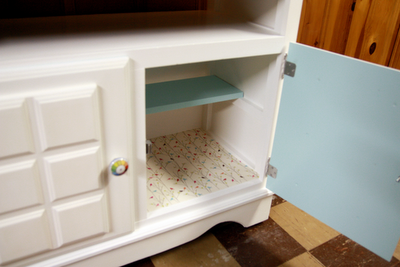 I found some deep turquoise paint so I lighten it up with some white paint and painted the one interior shelf and the inside of the doors the light turquoise color. 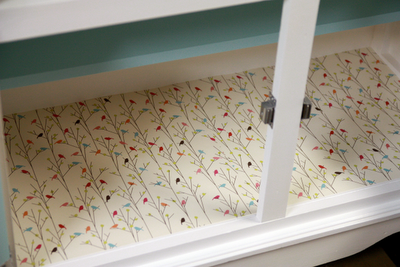 I used a metallic silver spray paint for the hinges and once I installed the screws then I touched them up to with some metallic acrylic paint I had on hand. 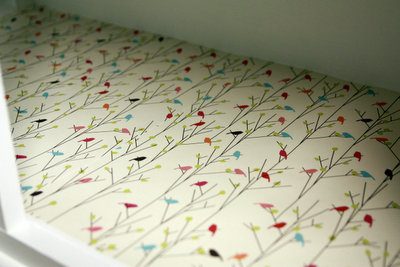 The two things that I splurged a bit on were the interior lining paper and the knobs. The lining paper, which is wrapping paper that is called "Tweets" is sold per sheet was ordered online from one of my favorite letterpress studios Snow & Graham in Chicago. I purchased a few extra sheets of this paper because I have a few other small projects lined up for this paper as well. You'll see soon! 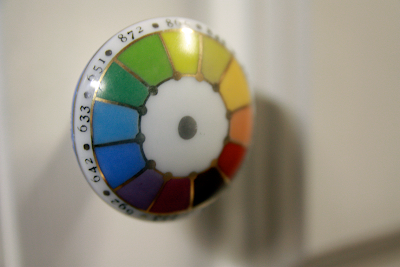 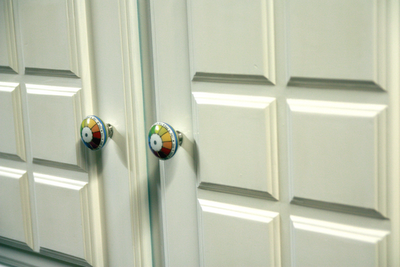 I wanted some unique looking knobs since I was painting the entire piece in white. The Color Swatch knobs were purchased from one of my favorite stores Anthropologie. If you're looking for unique knobs and hardware this is the place. The only thing that isn't done yet on the piece is that I'm having a piece of glass cut for the top from a local glass shop. I want to be able to slide things under the top and to protect the top finish as well.
Posted by cheryl oz at 8:11 AM