drawing and the iPad 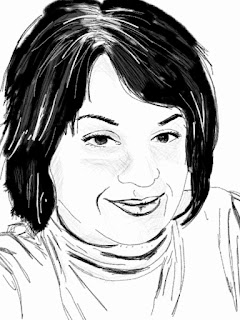 my friend jen
using sketchbook pro app - no stylus
I've been a Mac user for as far back as I can remember, so it was just a matter of time before I jumped in an purchased an iPad. So at Christmas my husband and I decided we would get one for us to share, although he always jokes that it's really mine because I'm usually the one using it. Like he didn't really know that it would be that way! Ha!

In the first few months of having it I downloaded all sorts of games, used it for book reading, blogging, social networking, etc. . I knew there were drawing apps but I was overwhelmed with all of the choices out there. So I sort of forgot about the whole drawing on your iPad thing. Then yesterday I was catching up on some of my design blogs and there was an article about cool accessories for iPad. From there I stumbled onto, a site about styluses for the touch screens to draw with and it was like a lightbulb went off. Wait a minute you mean I can get a stylus and draw directly onto my iPad, like a paper sketchbook, watercolor pad or canvas. The thing is I knew I could draw on it, but the idea of being able to draw with precision was very cool to me. So that's when the hunt began for a drawing app and reading reviews on a good stylus for artwork.

I settled on the Wacom stylus. I read some great reviews on it from illustrators who have tested multiple styluses. So let's hope it's the right fit for me. Years ago a friend of mine bought me a Wacom tablet for my computer. It was amazing to be able to draw with a pen instead of a mouse, but I never really loved drawing that way. I found it slightly awkward to draw on a tablet while looking up at the screen. I was always fumbling around to change the brushes, strokes, etc. It never felt natural to me. I do however use it all the time when I finish up a traditional illustration and use it for the scanning and clean up process. In that aspect it's an invaluable tool!

I have a list of drawing/painting apps that I'm interested in still checking out but I started with two. First, I got Sketchbook Pro. It was rated best drawing app of 2011 and I saw some seriously amazing work that was created from it. Some so amazing that I feel it's slightly out of my capacity but we'll see! I'm always willing and eager to learn more about art. :) The second, app I purchased is called Auryn Ink. It's a watercolor painting app. I have only played with this app for a short bit to see how it works, so far I'm loving the Sketchbook app over this one. Who knows I may change my mind when I receive the stylus. But, since I primarily use watercolor for my illustrations I thought I'd give it a try.

I'm not sure that I'll create finished artwork this way, but I'm excited that I will have a digital sketchbook always at my fingertips. I will always love working in traditional mediums. I can't imagine not using real paint, paper or pencils, but it's exciting to try something new.

I just have to say that this post doesn't even scratch the surface to how amazing I think this little iPad is, because truly iPad you've changed my life. :)
Posted by cheryl oz at 9:42 AM