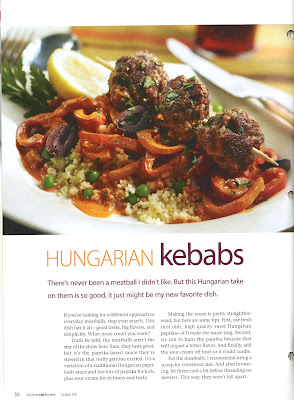 It's been awhile since I posted something delicious on my blog. Long ago, I received a subscription for Cuisine at home magazine as a Christmas gift from my Aunt. It was the best gift! If you've never looked at a Cuisine magazine and you love to cook I think you should check it out right away. The recipes themselves are broken down into steps with plenty of photos. That's what I love the most! I'm so tired of all of the cookbooks with no photos. I want to see a photo of the dish before I make it. This not only has the finished photo, but photos of the steps along the way. Each issue has been punched with holes so that if you want, you can put all of the issues in a convenient binder for each year. Not only do they have fantastic recipes with easy step-by-step directions, but they also have oodles of information on kitchen gadgets and cookware that they review and tips on just about everything.
My husband Jeff loves Hungarian cooking, because his Grandma was Hungarian and she would whip up the most fantastic meals he says. So, Jeff was out of town for almost a week on business and I decided I wanted to have a nice homecoming meal for him. I scoured my magazines and I ended up turning to an older Cuisine issue for Hungarian Meatballs in a Creamy Paprikash Sauce over Couscous with Peas. SO DELICIOUS! The meatballs were tender, the sauce was the perfect mix of tomatoes, peppers, cream and spice. The couscous was fluffy and flavorful and the addition of baby peas adds that little bit of color and sweetness to the plate. The dish itself takes awhile to make so I would recommend trying this dish on a weekend. Also, I might recommend baking the meatballs instead of pan frying it's quicker, and because the meatballs are so fluffy and tender they will be less apt to fall apart. Just don't over-bake them. You just want them brown on the outside, because they will continue to cook later in the sauce.
Instead of typing out the whole recipe and shooting my own photos, I decided to scan the two pages directly from the the magazine to give you an example of how the layout of Cuisine looks and feels, so you'll want to run out and get your own subscription. Enjoy! 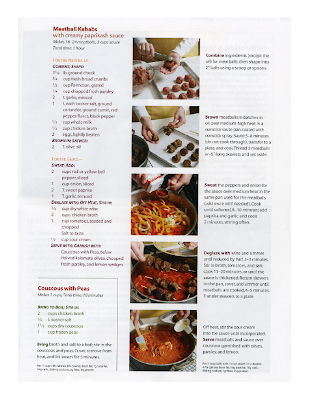 Email ThisBlogThis!Share to TwitterShare to FacebookShare to Pinterest
Labels: cuisine